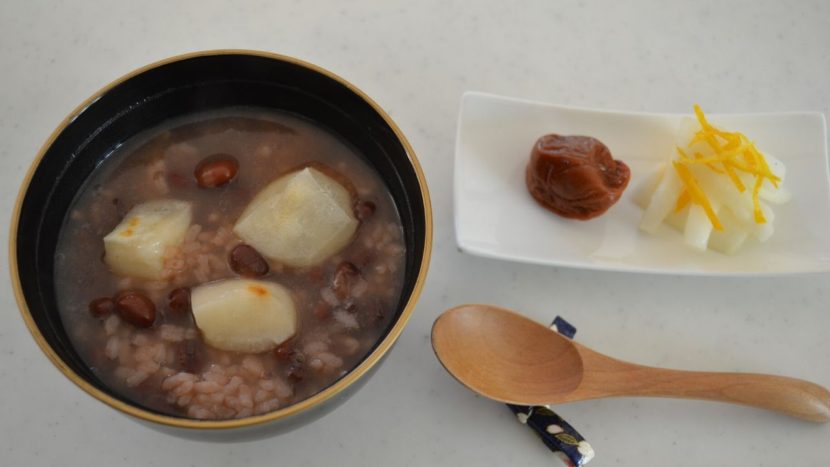 On that day, the New Year’s festive is over and now we pray for the luck and health.

Azuki beans considered to keep the evil spirits away from us.

And rice porridge is easy to digest, so we can give our stomach a good rest.

Transfer your Red Bean Porridge to a serving bowl and serve with Umeboshi and Yuzu Daikon.

This kind of food is not appreciated for young people because it is very simple and humble.

So was I, but now I feel like this kind of food is real Japanese food.

It contains no fat and very good for your health.

You can sprinkle some salt
before you eat to season. Sugar maybe.

The rice cake adds the toasted flavor and chewy texture to the porridge.

It is so so hot, so be careful to eat.

Ship the red bean porridge and eat a piece of Yuzu daikon alternatively.

Yuzu is smell so refreshing.

Sweet and sour flavor and crunch gives a twist.

It is very comforting
! I think this is the secret for the Japanese people’s longevity.

I think Azuki beans is easy to access, and any kind of rice would work for this recipe so just give it a try.

This site uses Akismet to reduce spam. Learn how your comment data is processed.

Hi!
Welcome to Kitchen Princess Bamboo!
I am Akino Ogata, chef of this site.
I was born and raised in Japan and have been interested in food since I was a child.
I am running a small pastry shop for 13 years in Nara, the oldest palace city of Japan. And I teach cooking at my kitchen since then.
I would like to share my knowledge which I learned from my family, customers and students.
Here I introduce authentic Japanese recipes to bakings that I develped for a long time. Most of them are easy to make!
I hope you will find your favorite and enjoy cooking!